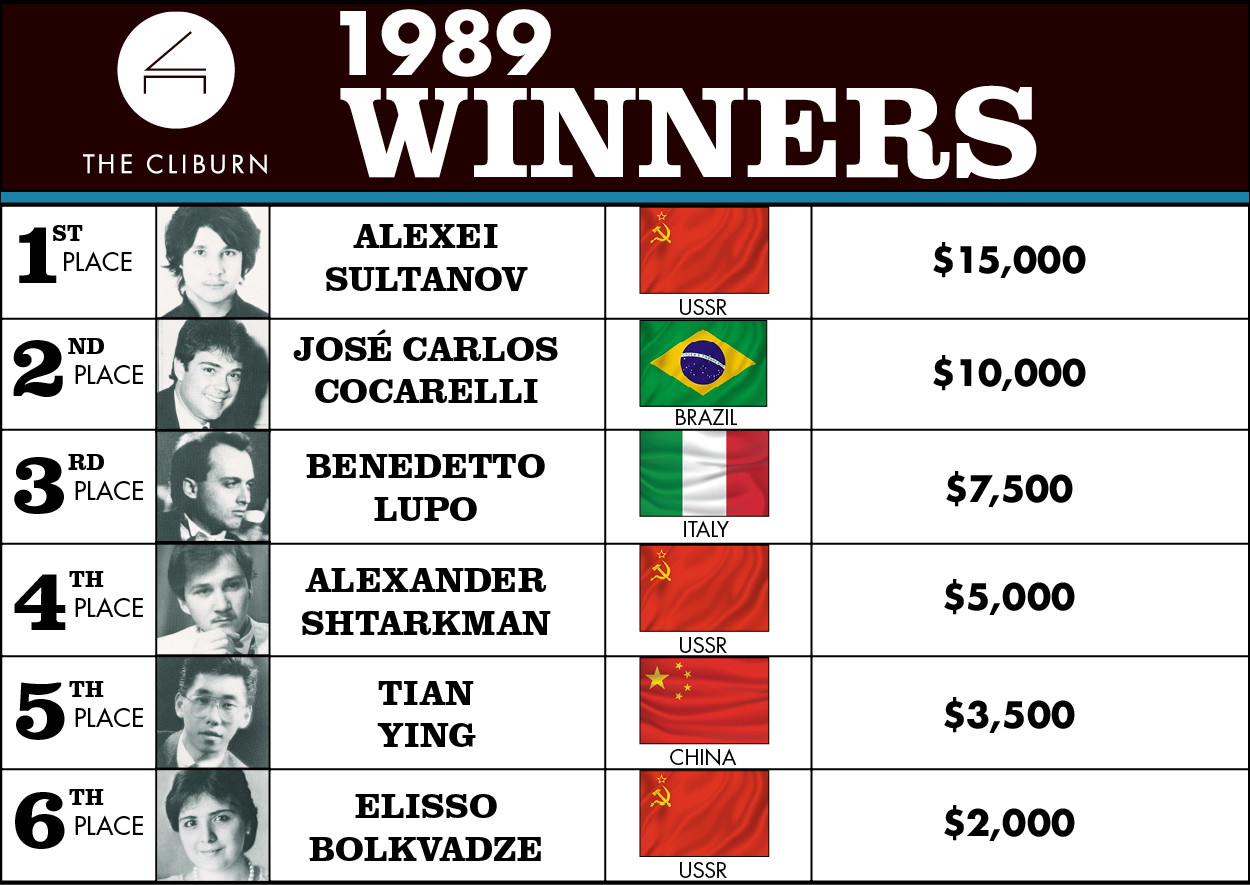 ALEXEI SULTANOV  After winning the gold medal at age 19, the Soviet-born pianist performed on The Tonight Show Starring Johnny Carson and Late Night with David Letterman. He made recordings for Teldec and Arts Core and appeared in concert at Carnegie Hall, Kennedy Center, and La Scala, and with the Pittsburgh, Royal Concertgebouw, Royal Philharmonic, Detroit, Dallas, and Atlanta orchestras. His brilliant career was cut short by a series of strokes, and he passed away in 2005 in Fort Worth.

JOSÉ CARLOS COCARELLI  The Brazilian silver medalist retired from the concert stage and became a Buddhist monk in France. He teaches piano at a community music school in Fresnay-sur-Sarthe.

BENEDETTO LUPO  Increasingly popular as a guest artist, the bronze medalist has performed with many of the world’s best orchestras and has recorded Schumann’s complete works for piano and orchestra, including the first CD recording of the piano version of Konzertstück, op. 86. Since 2013, he has served as the piano master-course professor at the Accademia Nazionale di Santa Cecilia in Rome in his native Italy.

ALEXANDER SHTARKMAN  This Russian pianist followed his success as a Cliburn finalist with a first-prize win at the Busoni Competition in 1995. In addition to his active concert schedule in Asia, Europe, Russia, and North and South Americas, Mr. Shtarkman has taught at the Peabody Conservatory of Music since 2002.

TIAN YING  The Chinese finalist is associate professor at the University of Miami’s Frost School of Music.

ELISSO BOLKVADZE  A star in her native Georgia, Ms. Bolkavadze released an album of Prokofiev and Schubert in 2015. A human rights activist, she gave a charity concert in collaboration with the Embassy of Georgia in Geneva, and appeared with the United Nations Orchestra to support Georgian children affected by war. In 2013, she founded the Batumi International Music Festival on the shores of the Black Sea, and she was named a UNESCO Artist for Peace in 2015.