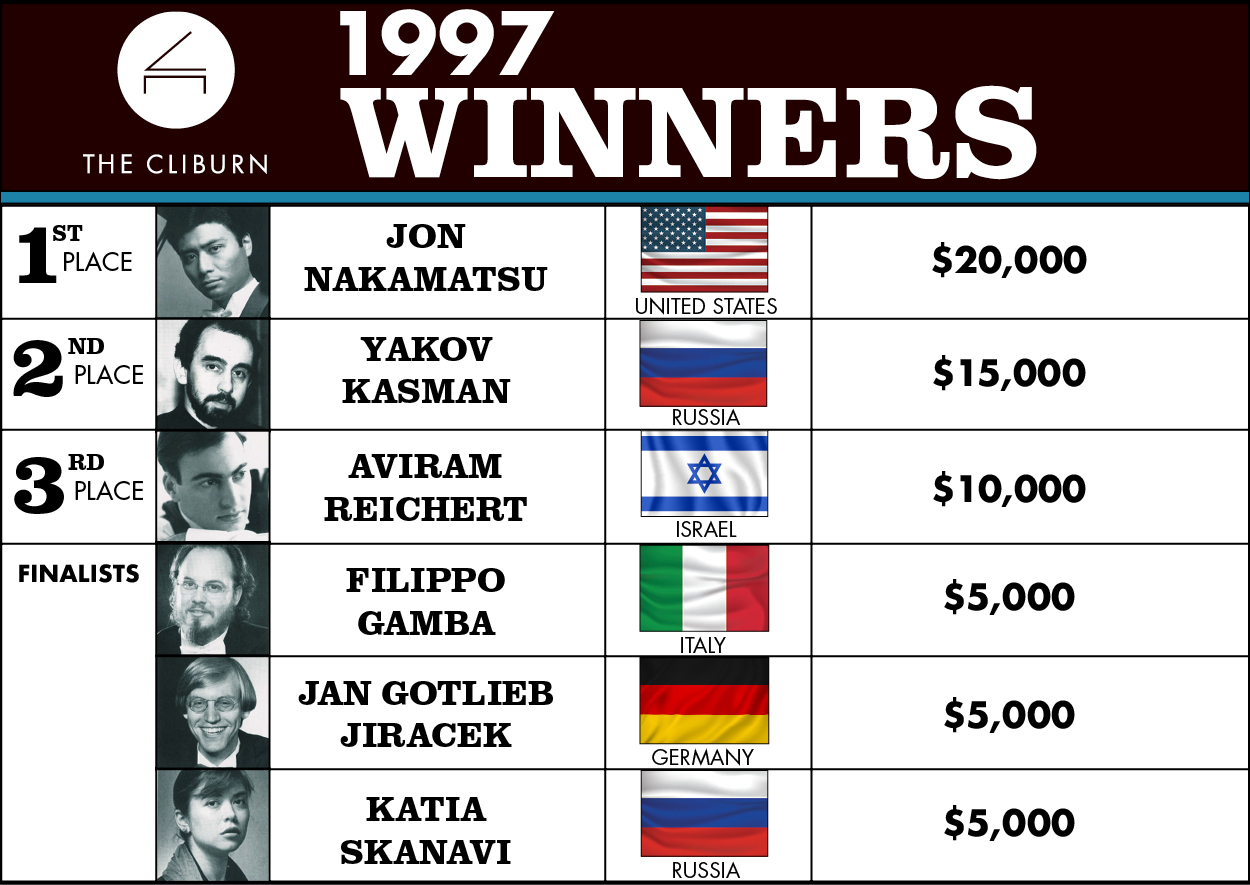 JON NAKAMATSU  The most recent American to win Cliburn gold has developed a highly regarded career as both soloist and chamber musician, performing with top U.S. orchestras. He has recorded 13 CDs for harmonia mundi usa, most recently a 2014 disc of Schumann, and was jury chairman of the First Cliburn International Junior Piano Competition in 2015.

YAKOV KASMAN  The silver medalist is artist-in-residence at the University of Alabama at Birmingham, where he also established a piano series that frequently features Cliburn winners. He has recorded 15 CDs on the Calliope label and performs as a soloist and in duo recitals with his daughter Aleksandra.

AVIRAM REICHERT  The Cliburn’s first Israeli medalist has an active career as soloist, recitalist, and chamber musician, particularly in Asia, the United States, and Israel, where he is a frequent guest of the Israel Philharmonic and Jerusalem Symphony. He is professor of piano at Seoul National University.

FILIPPO GAMBA  The Italian finalist went on to enjoy an active performing and recording career in Europe. He also is a professor at the Hochschule für Musik in Basel.

JAN JIRACEK  In 2011, Mr. Jiracek became artistic director of the International Beethoven Piano Competition Vienna. He has been professor of piano at the Universität für Musik und darstellende Kunst Wien since 2001.

KATIA SKANAVI  Recent highlights of Ms. Skanavi’s busy career have been recitals and orchestral engagements in Amsterdam, Berlin, London, Luxembourg, Madrid, Moscow, and Paris. She was invited by Maestro Valery Gergiev to participate in the Prokofiev anniversary celebration in 2016. Her next CD will be released in 2017 with sonatas by Beethoven, Schumann, and Prokofiev.