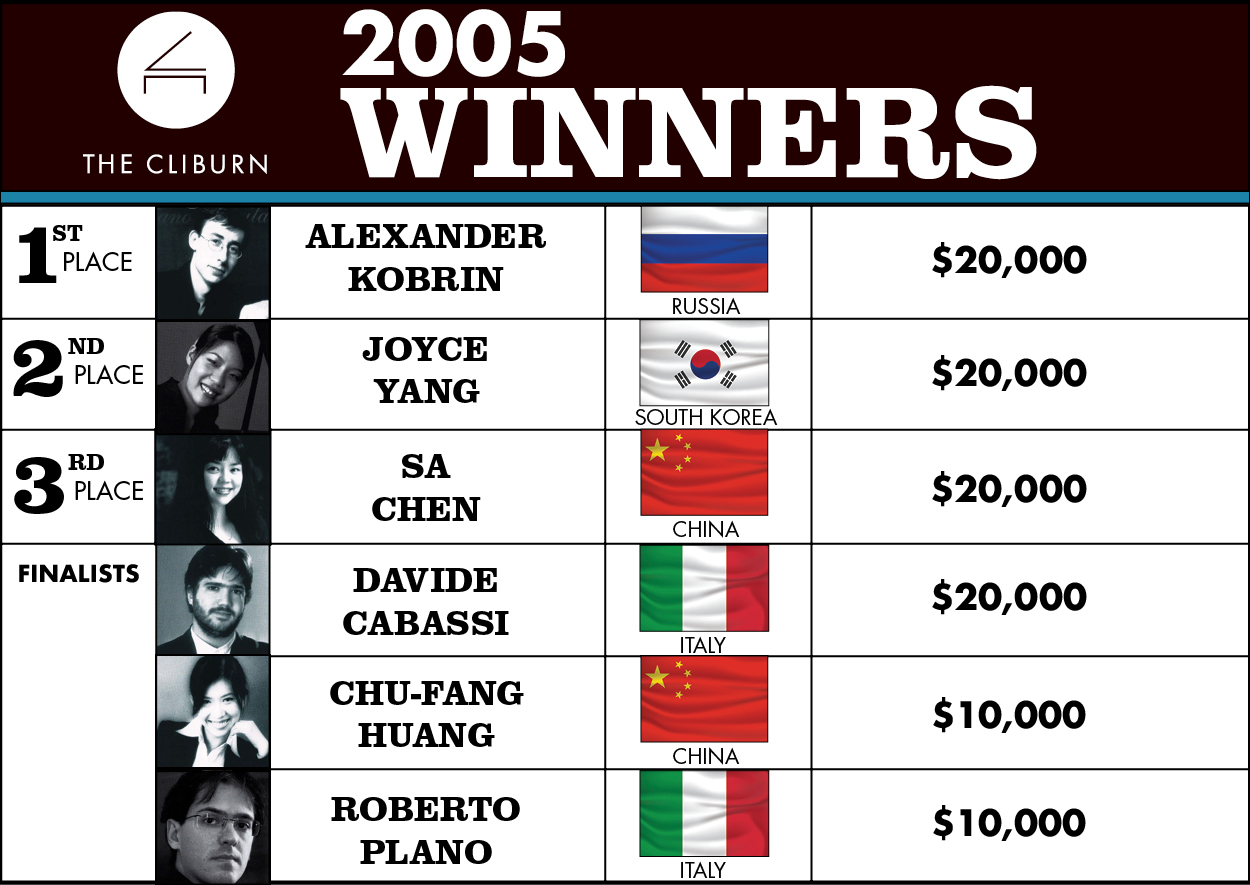 ALEXANDER KOBRIN  The Russian gold medalist also won the Cliburn’s first Internet Audience Award. In addition to performing across Asia, Europe, and the United States, he is the L. Rexford Whiddon Distinguished Chair in Piano at Columbus State University, and since 2013 has also been a member of the celebrated Artist Faculty at New York University’s Steinhardt School. In July 2017, Mr. Kobrin will join the faculty of the Eastman School of Music in Rochester, N.Y.

JOYCE YANG  The silver medalist was awarded the Avery Fisher Career Grant in 2010, and today enjoys a busy concert schedule. Recent highlights include debuts with the Minnesota Orchestra and San Diego Symphony, and tours with violinist Augustin Hadelich. In 2016, she released her first recording with Hadelich as well as the world-premiere recording of Michael Torke’s concerto Three Manhattan Bridges, a piece created for her.

SA CHEN  The Beijing-based Crystal Award winner is a piano star in China. Her recent engagements have included concerto dates with the San Francisco Symphony, recital tours in China and Germany, and a performance in Washington, D.C. as part of the Global Citizen 2015 Earth Day event.

DAVIDE CABASSI  Mr. Cabassi has performed widely, especially in Italy, and has been a faculty member of the Monteverdi Conservatory in Bolzano and artist-in-residence at the Col legno Festival in Lucca. Among his many recordings are discs of Mozart (2013) and Beethoven (2014) sonatas on the DECCA label.

CHU-FANG HUANG  The Chinese pianist won top prizes at the Cleveland Competition and Young Concert Artist Auditions shortly after being named a Cliburn finalist. She received the 2011 Avery Fisher Career Grant, is a Steinway Artist, and continues an active performing career.

ROBERTO PLANO  Since being named a Cliburn finalist, this Italian has maintained an active concert schedule in Europe and the United States. He founded and teaches at the Accademia Musicale Varesina, and created the Music Association “Alfred Cortot” to spread the joy of classical music while emphasizing music education for children. His 2016 debut recording for DECCA Classics featured the Harmonies Poétiques et Religieuses by Liszt, which DECCA had not recorded since the 1960s. In September 2016, he joined the faculty of Boston University.