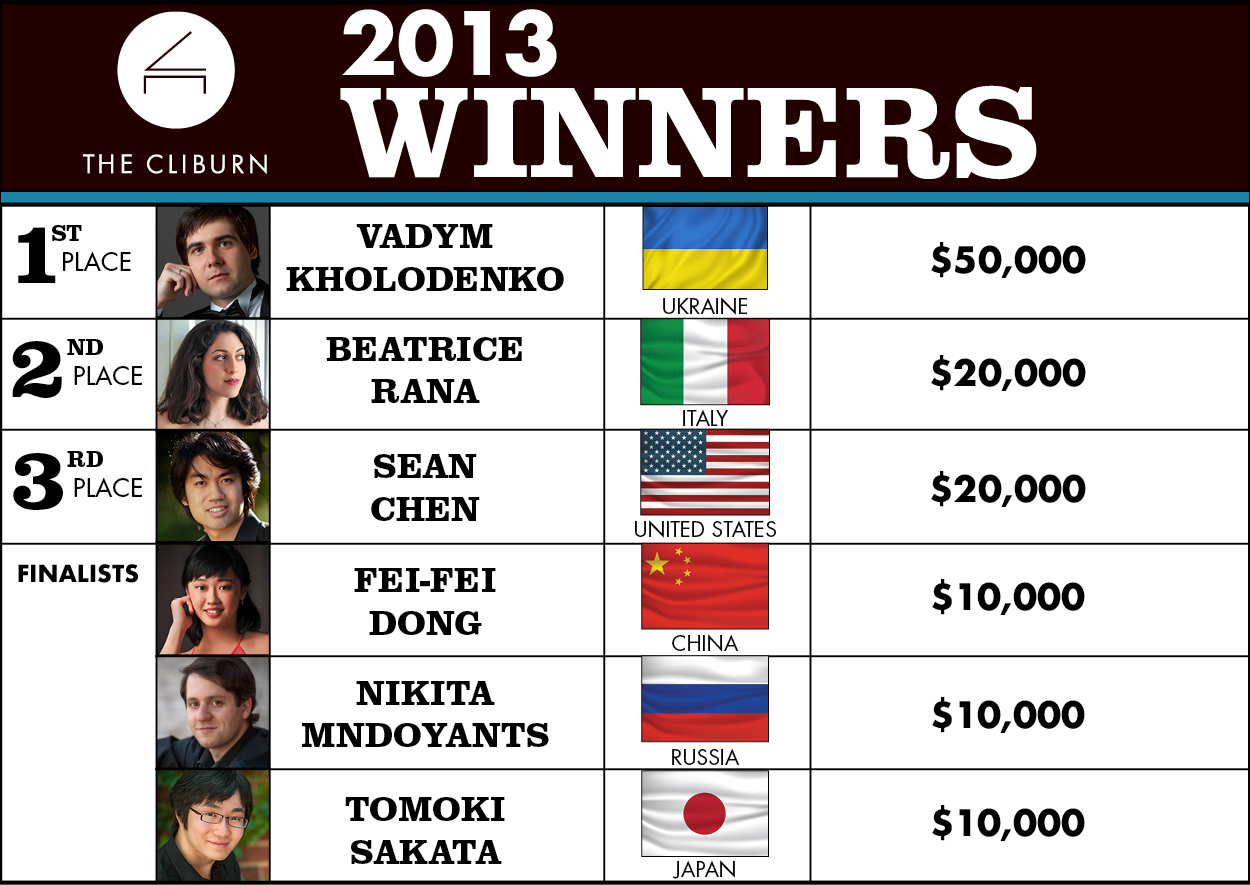 VADYM KHOLODENKO  The Ukrainian-born gold medalist quickly emerged as one of the most gifted performers of his generation. This spring he ended a three-year artistic partnership with the Fort Worth Symphony that included live recordings of the complete Prokofiev piano concertos released by harmonia mundi. This season he also appeared in Paris with the Mariinsky Theater Orchestra conducted by Valery Gergiev; with the Royal Philharmonic Orchestra; and at the Phillips Collection in Washington, D.C.

BEATRICE RANA  Since winning the Cliburn silver, this Italian pianist has made waves on the international music scene, collaborating regularly with conductors on the highest level and performing at the most esteemed venues and festivals. This season she performed Bach’s Goldberg Variations at Wigmore Hall, Théâtre des Champs-Elysées, and many others. She is an exclusive Warner recording artist; her new Goldberg Variations disc won BBC Music Magazine’s Newcomer Award.

SEAN CHEN  The charismatic Crystal Award winner was named a 2015 fellow by the Leonore Annenberg Fellowship Fund for the Performing Arts. He collaborates with prominent orchestras and is an advocate of new music who writes and performs his own transcriptions. Mr. Chen also is a Steinway Artist and has contributed to the catalog of Steinway’s new SPIRIO system.

FEI-FEI DONG  The Chinese finalist performs widely as a concert pianist and a teacher through outreach sessions and master classes. Since her Cliburn appearance, she has made her Weill Recital Hall debut at Carnegie Hall, performed for the Gilmore Rising Stars Series, and appeared at Bravo! Vail Valley and other notable music festivals.

NIKITA MNDOYANTS   The Russian pianist, whose father was a Cliburn finalist in 1977, went on to win the Cleveland and Paderewski international piano competitions. He tours throughout Europe as a solo and chamber musician and also is active as a composer.

TOMOKI SAKATA   After his Cliburn success, the young Japanese pianist went on to win the Franz Liszt competition in Budapest and has made recital, chamber, and concerto appearances throughout the world. Octavia Records released his debut disc in spring 2015, featuring works by Liszt, Scriabin, Debussy, Chopin, and Rachmaninoff.